Imperial Woodpeckers of the Sierra Madre

In the high mountains of Mexico’s Sierra Madre Occidental there once lived a woodpecker unlike any other—a giant, largest of its clan in the world, whose pounding drumbeat echoed like the blows of a wild axe man through the primeval forests as it bored into massive, grub-infested pines, hammering on them powerfully for weeks at time until they groaned, shuddered, and finally toppled with an impact that shook the ground. Victorian explorers dubbed it Campephilus imperialis—the Imperial Woodpecker. But it had already been named long before. To the Aztecs, it was cuauhtotomi; to the Tarahumaras, cumecocari; to the Tepehuanes, ua gam; and to the Spanish speakers, the pitoreal. 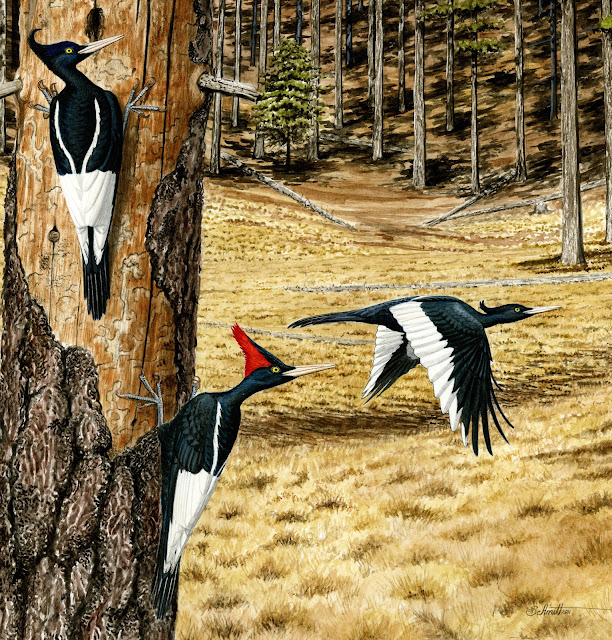 Two feet in length, with the deepest black plumage and brilliant, snow-white flight feathers that showed as a white shield on its lower back, the Imperial Woodpecker was impossible to miss. Its eyes glowed golden yellow; its massive, chisel-like bill shone white as polished ivory; its feathery crest curved forward to a shaggy point. And it was noisy, blaring a loud trumpet-like toot as it hitched up a pine trunk, foraging for beetle grubs as big as a man’s thumb. But its showiness was its undoing—that and the fact that it stayed in tight family groups and often hung around, curious, when one of its group was wounded or killed.

The last documented sighting of the species was a lone female filmed by William Rhein in 1956. This was the only photographic documentation ever made of a living Imperial Woodpecker. Many biologists have already written the Imperial Woodpecker’s epitaph, and it is a sad tale of massive habitat destruction and wanton killing. But stories still persist of lone pitoreales flying yet over the most remote pine forests of the Sierra Madre.

I began searching the Sierra Madre for Imperial Woodpeckers about five years ago and interviewing people who remembered seeing them. It was a tough process. The area has become a major center of drug growing. It is remote and often dangerous as you run into AK-47-toting drug traffickers.

I’ll be posting photos I took and stories of the people I encountered in my travels through the Sierra. I have a book coming out later this year titled, Imperial Dreams: Tracking the Imperial Woodpecker through the Wild Sierra Madre, which I’ll say more about as it gets closer to its release date. I invite anyone who has seen an Imperial Woodpecker (even if it was decades ago) or knows someone who’s seen one to contact me.

Posted by Tim Gallagher at 4:14 PM

I'm the author of six books, including my latest, Born to Fish (Houghton Mifflin Harcourt; May 2018) about world-class angler Greg Myerson and his conservation efforts on behalf of the striped bass.
My other recent book is Imperial Dreams, about my search for the Imperial Woodpecker of Mexico, the largest woodpecker that ever lived. Two feet in length, with the deepest black plumage and brilliant, snow-white flight feathers that showed as a white shield on its lower back, the Imperial Woodpecker lived only in the high country of northwestern Mexico. The last documented sighting of the species took place in 1956, and many scientists have already written the bird's epitaph. But stories persist of lone Imperial Woodpeckers flying yet over the most remote pine forests of the Sierra Madre.
I began searching for these birds about ten years ago and interviewing people who remembered seeing them. It was tough. The mountains have become a major center of drug growing where you often encounter AK-47-toting drug traffickers and other dangerous people.